Augusta with Quick Chip: A Faster Way to Do EMV

Wouldn’t it be great if a chip-card transaction took, say, 2.0 seconds instead of 20 seconds?

We thought so too. Which is why ID TECH is proud to introduce the patent-pending Augusta with Quick Chip (see photo), the fastest contact-EMV card reader money will buy. Just insert your chip card, remove it two seconds later, and put your card away while a receipt prints out. It’s that fast. (Come see it in person at the National Retail Federation show, Booth 4521, at the Javits Center, Jan. 15, 16, and 17.)

Augusta is blazing fast, but this isn’t just about speed. It’s also about making EMV play nice with virtual terminal technology (browser-based point-of-sale apps), and that turns out to be a much harder nut to crack.

But crack it we did! 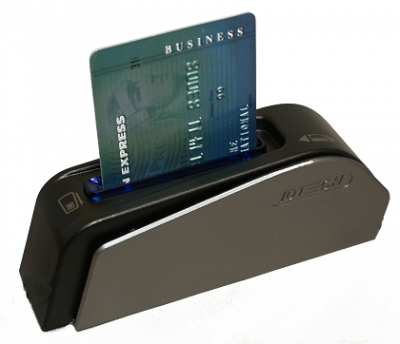 Old-school magstripe readers lend themselves nicely to browser-based POS apps, because you can just swipe a card through the reader, and track data will show up as a raw stream of characters (i.e., “keyboard data”) in a text field on the screen, capturing the customer’s data right where and when it’s needed.  That’s great for doing old-fashioned magstripe transactions, but unfortunately, chip-card readers can’t output raw “magstripe data” straight to the screen. The data inside a chip card isn’t meant to be captured this way, and that’s part of what’s keeping small merchants from adopting chip card technology.

In a standard chip-card transaction, there’s a lot of “chatter” between the card, the reader, and the capturing POS app. The reader interrogates the card, the POS interrogates the reader, and lots of data has to be passed back and forth in order for the POS to know when (and whether) to go online for authorization. Even after the POS goes online, the card is allowed to review the online decision (and in theory, it can veto the transaction). All of this happens while the card remains inserted in the machine. The whole process can easily take 10 to 20 seconds.

With the new, patent-pending Augusta card reader, ID TECH changes the game by combining lightning-fast Quick Chip technology with USB “keyboard mode” output. Unlike other chip card readers, Augusta operates in USB-KB mode, capturing EMV data as ASCII-encoded TLV triplets (tag, length, value), which can appear directly in the POS app, or be intercepted and processed via JavaScript using standard browser event handlers. Instead of a weeks- or months-long EMV integration project, ISVs and payment-app developers can get Augusta integrated into a virtual-terminal environment in an afternoon. And certification is quick, due to the super-simplified nature of the Quick Chip certification process.

In Quick Chip mode, much of the EMV transaction logic is hard-coded, so that once the card has been read, the customer can remove the card from the machine immediately. The “online authorization” happens while the customer is putting his or her card away. The transaction takes just a couple of seconds (about the same amount of time as a magstripe transaction), greatly streamlining the customer experience.

The details of how Quick Chip works are pretty geeky, but if you want to see a detailed technical explanation, ID TECH has a nice white paper on this subject. It’s free for downloading and (for the time being) requires no registration whatsoever, so head here to get the PDF. And in the meantime, if you have questions about the product or the technology, give ID TECH a call at 1-800-984-1010, or drop by Booth 4521 at the National Retail Federation show at the Javits Center in New York, Jan. 15, 16, or 17, where you can see a live demo of the Augusta, in person — and find out for yourself just how fast a chip-card transaction can be.

Check out our Augusta product page. Or call us at the number below, any time:

Be sure to ask about the SRED version of Augusta, too.

If you enjoyed this blog (or the white paper), by all means sign up for monthly updates (see link at top of page).